Posted by Penelope No comments: 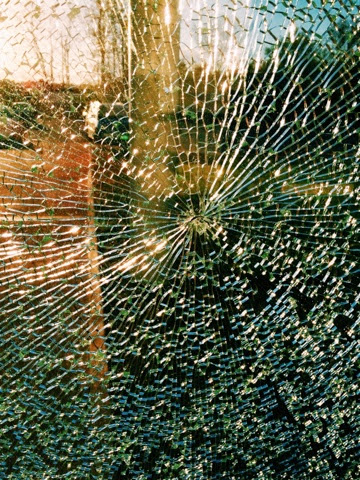 You know when the universe is trying to tell you something? I broke a glass bowl this morning. As I was rushing around trying to get everyone ready for work and school, I rushed to shove the bowl into a cubbard and it tumbled out of my fingers and hit the ground at breakneck speed, shattering into hundreds of shards all over the kitchen floor. I had to stop everything to clean it up.
As I was thinking of the bowl just now, I remembered this photo I took yesterday of a broken window at my office. The reflected light from the shards reminded me of something I wrote a couple of years ago. Now, how many ways can I read into this series of events?
A glass window pane can be a harsh and cold-hearted thing. It can bottle you in and completely cut you off from the world around you. On the outside, the fragile bird is fooled by his reflection and hugs into the glass at break-neck speed. But shatter the glass, and you and the bird can be set free, swept up by the swirling wind into the heavens above.For those of us left behind, the sharp fragments of glass cut a painful wound deep into the heart. But if you can manage to shift your view ever so slightly, you will see that the shards become a luminous prism, casting millions of magical rainbows across the landscape and letting us steal a glimpse into that world beyond.
Posted by Penelope No comments:

I'm staying at my parents this week with the kids. Partly to avoid a week of single parenting, while Col is traveling for work, but mostly to spend some time here while I'm still on maternity leave.
Amelia is at peace here. She loves the chickens, the garden and being able to run around and explore. And she loves here Lalla and Papa Lalla. This means a lot to me--and to them--because you know how fickle and unpredictable toddlers can be.
Angus is being his usual mellow happy self. What a sweet little boy.
And me? I'm fighting the exhaustion of caring for two young children on my own. And trying not to think about going back to work next week. 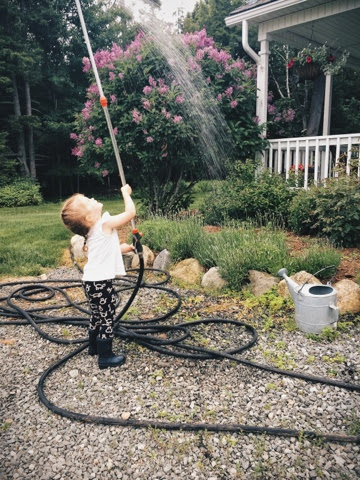