I saw The Queen last night. Not in person, in the movie. Helen Mirren portrays with fervor a chill likeness to Her Majesty Elizabeth II in the aftermath of Princess Diana's death. I watched half with awe and half with sadness remembering the china bell my mother gave me years ago that had a picture of Charles & Diana printed on the front and a golden handle shaped like a plume. That bell broke with some irony shortly before the couple's marriage ended. But I lovingly glued it together and placed it in a box for safe keeping. I have yet to find that box. 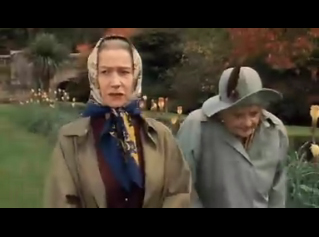 Funny, as infatuated as I was with Diana and her stunning presence, I never once considered the Queen. She meant nothing to me, except for her small resemblance to my English grandmother, though not half as pretty. Queen means next to nothing in today's terms, but Princess. Princess is the stuff little girls' dreams are made of. Right?

Last night was different. I saw the Queen, for what it's worth, from a different perspective. From an empathetic--and sympathetic--point of view. I saw a woman who, when in her darkest moment, donned a gorgeous royal scarf and went to befriend a wild stag in the Scottish highlands. The scarf seems somewhat out of place in the otherwise stoic country-side and on the neck of such a somber lady. It, however, like the stag, has significance. As the stag seems to represent a glimmer of hope before embodying the Queen's broken spirit, the scarf also carries with it layers of symbolism. Like a printed veil, the scarf is a visual depiction of the Queen's fear and vulnerablity, while at the same time representing her strength and determination as one of the most powerful, albeit fated, women in history.

I'm sure that Princes Di wore many scarves in her shortened lifetime, and I'm sure she wore them beautifully. But this scarf, the Queen's scarf, is in a realm all its own.

And have you noticed? HM Elizabeth II is not the only Queen to grace the screens these days. A new enstated awe of the womanly monarchy is sweeping through our film culture. Does the scarf have significance beyond the English Isle? Who knows, perhaps Marie Antoinette wore a scarf to hide the forshadowing across her neckline.

Email ThisBlogThis!Share to TwitterShare to FacebookShare to Pinterest
in: england, fashionista, film