On Saturday, we had to go to Trapp Family Lodge in Stowe for a wine and cake tasting for our wedding. (That's where we're getting married in January.) We thought the wine tasting might be a little overwhelming, so we asked Hannah, Emi, Kevin & Sapphie to come with us.

Planning a wedding can be overwhelming and tiresome at times, but there are some really fun aspects and the tastings are my favorite part so far! We started with the cake, which was delightful. Only a few more modifications and we'll be there.

For the wine tasting, we tried 4 different whites, 3 bubblies, 4 reds and 2 dessert wines. Such a big job! Then as if that weren't enough, Kira, our wedding coordinator gave us a copy of their entire 25-page wine list to take home and mull over in case there are any more that we'd like to try. Needless to say, we're far from picking our winners.

We did however find a favorite bubbly. We tried a champagne from France, a sparkling wine from Napa and a frizzante from Austria. The winner—which surprised us all—was the frizzante from Austria. (The darkest one on the far right.) It was the least fizzy with some hints of red currant. And we all just fell in love. I love the color too.

But that's the only thing I will divulge. We need to have some surprises... 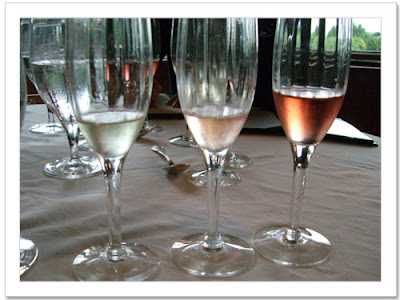 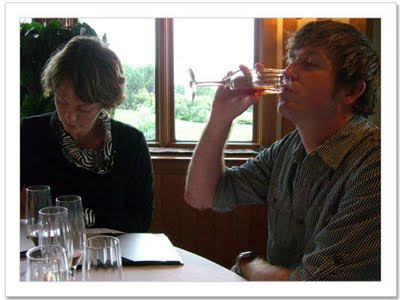 Hannah in heaven and Kevin inspecting the wine... 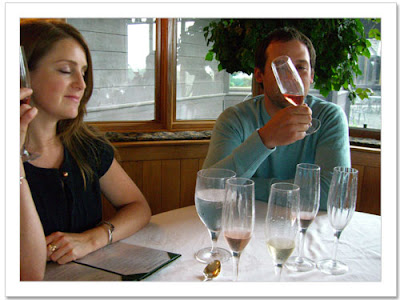 Sapphie was there somewhere playing... she had a good time too :-)
Posted by Penelope No comments: Links to this post

Email ThisBlogThis!Share to TwitterShare to FacebookShare to Pinterest
in: drink, food, vermont, wedding 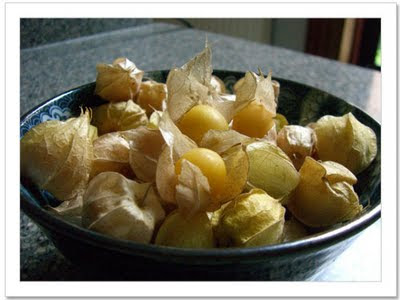 I made quite the little food discovery at the farmers' market yesterday. Have you ever heard of a ground cherry? The Arethusa farm stand had a few pints of small cherry tomato-like fruit in papery husks—the kind you would see on a tomatillo. I asked the man there if they were gooseberries and he said no, but some people call them gooseberries. They're actually called ground cherries and they're delightful. He let me try one and they were so delicious and unusual I just had to buy a pint. And then Emi and Kevin tried one and they just had to buy a pint too.

When you unwrap the husk, you find a small orange fruit that looks like a little berry. They are firm and when you bite in, the insides are juicy. The fruit is sweet and the flavor is a cross between a cherry tomato and pineapple. Each one is different, sometimes the berries even have a vanilla undertone. We had some in our salad last night and now I'm thinking they would make a wonderful topping for homemade ice cream. Plum ice cream... 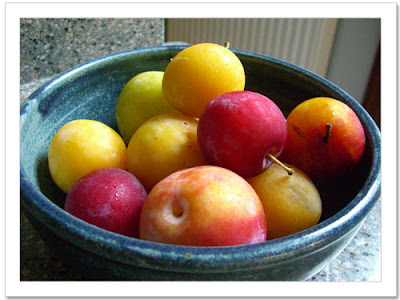 I think I will try making ice cream using these plums that I also got from farmers' market yesterday—from the woman in Charlotte. I love Vermont in August...
Posted by Penelope No comments: Links to this post

Email ThisBlogThis!Share to TwitterShare to FacebookShare to Pinterest
in: burlington, food, garden, vermont

I'm utterly engrossed in my work right now. In a good way. And I can't wait to be able to tell you all about it. But for now, you'll notice I'm away from my personal desk more than usual. (We all need a little escape from the computer screen!)

I took a break from it all this past weekend. One of my mostest friends Brooksie came to stay; my bestest sisters and mum in the world hosted the most amazing bridal shower for me; I got to see lots of family and girly friends; I was treated like a princess by everyone. It was incredible. Here's Brooksie at Leunig's wearing her new MJ tee: 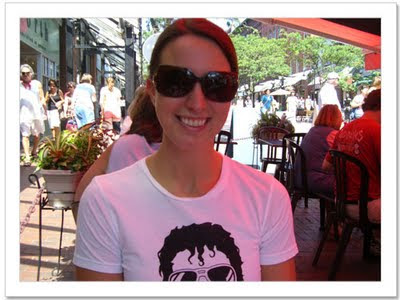 And here's me at the shower opening my presents. Image courtesy of Kim. I was too busy to take photos this time. Thanks Kim! 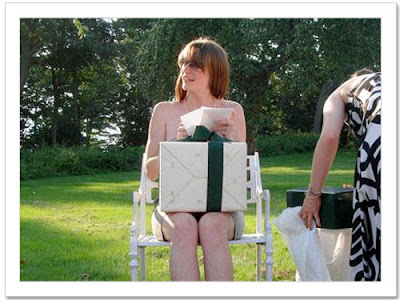 (I got some really incredible gifts; it was rather overwhelming. People keep asking me what my favorite gift was, but they were just all so great, I really couldn't say, Sir!) We sat outside on the back lawn, sipped on spiked lemonade and nibbled yummy little treats including my favorite dried dates stuffed with Doe's Leap goat feta and pistachios. I was very nervous to have all that attention, but it ended up okay. Thank you to everybody near and far who came to my shower. It meant so much to me.

Well, a part from the amazing weekend where I was a lazy queen, I've been pretty busy. Mostly with work. But that hasn't stopped me from getting a gorgeous dinner on the table every night. The produce right now is just too wonderful to pass up. And as I know I've mentioned before, cooking helps me decompress after a long day at the computer.

Oh and they keep giving away food at work when they're done using it for photo shoots. Yesterday it was sweet corn on the cob. Tonight: heirloom tomatoes! Can you believe it? Here's the amazing dinner I made with them and some baby squash from the farmer's market. I cooked the squash in my new copper pot that Colin's mom gave us at the shower—Joan, the pot is unbelievably beautiful and it felt so good christening it with these beauties: 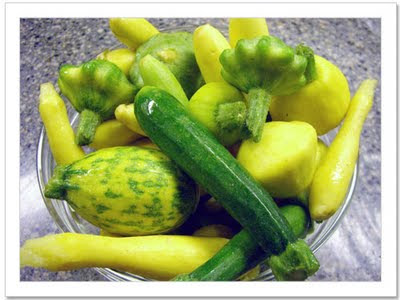 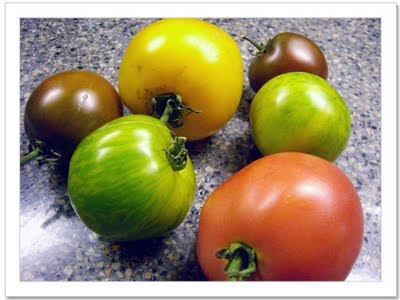 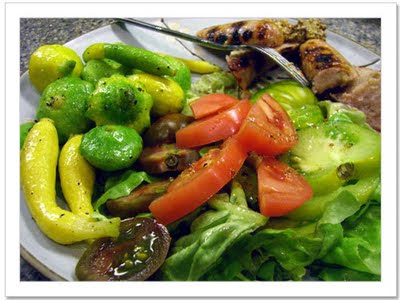 We just got back from a long weekend road trip to Prince Edward Island in Canada. That's right I said, long weekend. We must be insane—the drive is about 14 hours—we were on the road for 3 out of the four days. But that's why I called it a road trip. And it was all totally worth it. I had some of the most amazing food I've had in a long time. And so much fresh seafood! Mussels, lobster, crab, oysters, shrimp, trout, salmon, tuna... the seafood was endless and delicious.

Here's the Google map we followed: 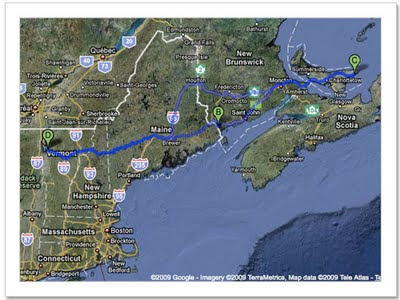 The drive was half the fun. The first day, we drove to St. Andrews in New Brunswick and stayed at the historical Fairmont Algonquin. The St. Andrews By the Sea is a cute town, but there's not much going on. Or maybe it's because it was later than we thought. Nobody told us about the time change, but we finally figured it out on the second day. We ended up eating a late dinner at the Algonquin and I tried their Passamaquoddy Bay Beeze, it was good!

On the second day, we drove to PEI and to our inn—The Inn at Bay Fortune. We loved our little room, which came with its own fireplace. That came in handy during the chilly evenings.

The Inn apparently has one of the best restaurants on the island, so we ate there on Friday night. Lots of the ingredients were right from the island, except for my trout, which was from across the water in Nova Scotia.

The chef sent us a little nibbly while we perused the menu. It was a creamy cheesey type thing with trout on top of a homemade potato chip.

We started with fresh oysters that were out of this world. Instead of being served on the half shell, they were served in a briny cold broth with crunchy vegetables. The salad was picked from the garden out back right before dinner. The trout was served with the most amazing baby vegetables and the most delicious and tender potatoes I've ever had in my life (PEI is famous for their potatoes). They may have been poached in butter... Colin had seared tuna.

We drank a local white wine with our dinner from the PEI Rossignol Winery. It was surprisingly good, crisp and apple-y and went amazingly well with the seafood. I tried to bring a bottle back, but we couldn't find a liquor store open on Sunday morning and that's the only place they sell wine there.

Dessert for me was a truffle chocolate tart with roasted pear and Colin had homemade ice cream sandwiches. Mmm, I'm getting so hungry writing this!

By the time dinner was done, 3 hours had gone by and we were ready to crash. Luckily, our room was just steps away... and the fire was ready to go.

On Saturday, we went to Nicks & Sam's wedding at Red Point a little way up the coast. The ceremony was on the beach by Sam's family's property and it was just so perfect. There was a bagpipe player leading Sam to the beach. Nicks wrote the best vows I've ever heard. I definitely cried. I always cry at weddings.

We had starved ourselves all day, because we heard the food was going to be amazing. And it was. Full raw bar with mussels, oysters, lobster, crab and shrimp. Sushi, dumplings, scallop ceviche and more of those potato chip type nibbly things. We were like vultures—we ate so much! Dinner was awesome and there was even a cheese plate course. But at that point we were stuffed and had to dance it all off.

We never did make it to Anne of Green Gables country, it was too far away from where we were staying. But I have no regrets.

Next morning, we headed back to Vermont. It took us all day and into the night. A whirlwind! But worth trip.

Here are a couple: 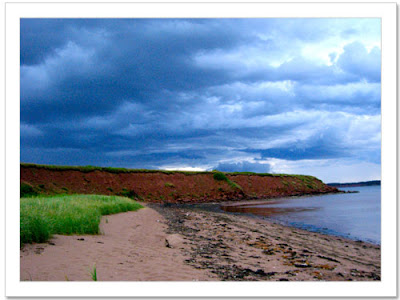 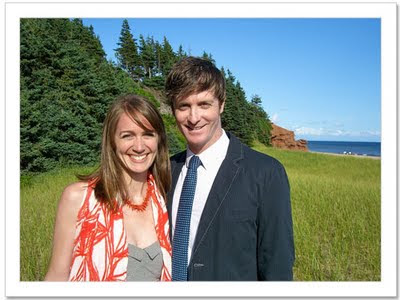