Last night I had some terrible dreams. I found myself alone in a haunted temple with stony vaulted ceilings. The stones shifted shapes and lashed out at me—they were demons. Suddenly I was on the Metro in Paris and I couldn't understand what people were saying. (But how can that be? I speak French, I remember thinking.)

I didn't know where I was or how to get where I wanted to go. I got on the wrong train, one of those long distance trains that doesn't stop till the end. And it was going to a dangerous place. I was trapped. And the other passengers lashed out in front of me like the demons in the temple. They tried to rip my clothes; steal my passport.

Suddenly, I was back in the temple. But this time it was filled with people. I was crying uncontrollably. I realized it was a funeral. My friend's brother had died.

I woke up in a sweat, my legs and arms crossed so tightly. There was a sound coming from the street, the sound of cars driving slowly. I looked out the window. There were tons of cars lined up outside. They were all heading towards the school. And then I remembered: it's election day!

Election day. Just the thought gave me a chill. One way or another, all of this unrest will finally be settled.

I got ready as quickly as I could, then I walked out the front door and turned towards the Middle School. I'm lucky, it's just three houses away. As I walked closer to the entrance, there were tons of campaign posters and people holding signs. I didn't look at them. My mind's been made up for months. But I still got a chill entering the building.

I walked up to the sign for district 3-3 and told the man my name. He gave me two ballot sheets. One for the official State of Vermont ballot and one for the city of Burlington. One of them was bright pink.

I filled out the ballot with a black marker.

Then I walked up to the machine that looks like a copier and put my ballots in one at a time. The volunteer next to the machine gave me an "I voted" sticker. I stuck it on my blue and white striped top.

Just a matter of minutes, and all before 7:45, but I feel so accomplished already. And at 1:30 today another huge feat comes to fruition: my sister Emi is defending her PhD thesis. I'll be there for the presentation with Kevin.

(I'm still trying to figure out the significance of the dreams.) 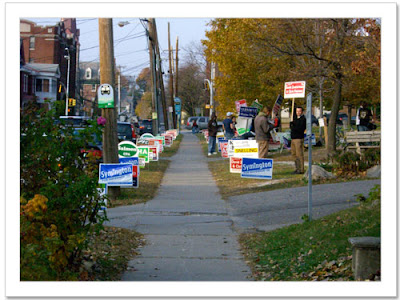