powder on the mount

One of the popular courses of discussion at my work, besides food of course, is the weather. That probably goes without saying at many a workplace. Especially with such a snowy winter as we have had. And what I've noticed from these kinds of conversations is that you can immediately detect the skiers and riders from everyone else. They're the ones that, when April 1 rolls around and the weather service puts out a winter storm warning predicting 6-8 inches of snow, are crossing their fingers for powder. Whereas everyone else just gets depressed. I belong to the former group.

So yesterday at work, when the only wet coming from the sky was a cold, damp rain, and some anti-snowy colleagues began to gloat, "I knew that forecast couldn't be true," I found myself slightly annoyed. "I'll show them!" I thought to myself and set my alarm clock for 6:45 a.m. this morning (Saturday). I dragged myself out of bed and called the Stowe line. They had 6" of fresh snow! With Colin on the other side of the world and my snowboarding friends out of town, I packed up my stuff and went to Stowe solo.

I found a quiet untouched corner and had powdery trails all to myself. "Where is everyone?" I wondered. I guessed they were probably back at home cleaning up their yards for spring. Or taking a run in the mud and puddles. Not me though, I was enjoying full-on winter up there.

I took some pics with my phone and texted them to Col. "Pow! Wishing you were here." He was just about to have dinner in Hong Kong. "Having pre dinner drinks overlooking HK," he texted back. (That text'll cost $0.25). I was about to ride a trail that's only open when there's lots of snow, because of all the rocks and drops. First time I tried it was with Col during the epic March snowstorm. Second time was now, by myself. So I sent another pic to prove I was doing it. He wrote back, "Wow... that's unfair! Shred the pow pow!" (Another $0.25, but so worth it: I miss my boy and having that little conversation was the next best thing to having him there with me.)

I wish I could say I stayed there all day, but after a couple of hours I was tired and ready to go home. And by that point, the snow was getting chunky and wet and slow. No, didn't last long, but it was long enough to get outside and enjoy this beautiful paradise we live in.

As I drove back to Burlington, the snow began to recede. It was a totally different world and climate less than an hour away. I walked up to my back door and noticed that the huge pile of snow that had accumulated on top of our garden is almost totally melted. I picked up a couple of stray papers that had blown around onto the yard and underneath one of them I found fresh green 2" shoots sprouting out of the dead chive patch from last year. My chives are up!

Winter at the mount, spring in the valley. I can live with that. It's the best of both worlds. 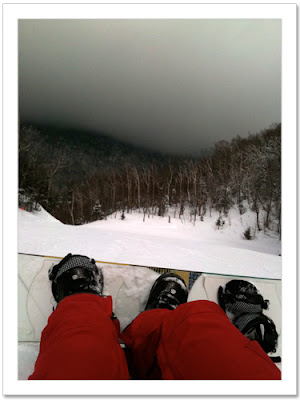 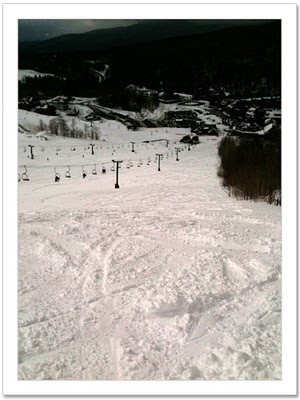 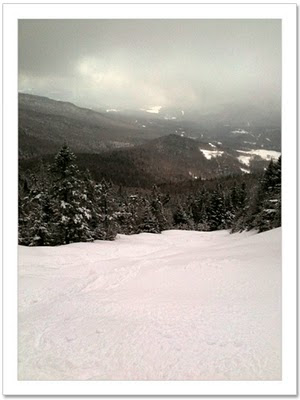 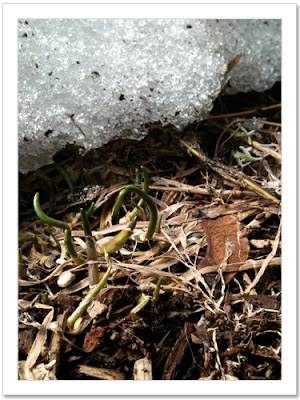 Awesome! Wish I could have come along!