I'm really bummed about it, but my camera died almost as soon as we got down to NYC and I realized that I didn't bring my charger. I did manage to take a couple pictures at the Gershwin. That was on Saturday afternoon. The Gershwin is right around the corner from the Flatiron building. We checked in and then headed down to SoHo to get in some last minute shopping. That was fun. I got a new vest at H&M (the only thing I allowed myself to buy for me--it was only $15). But other than that, I just had fun walking around and checking out all of the crazy people. 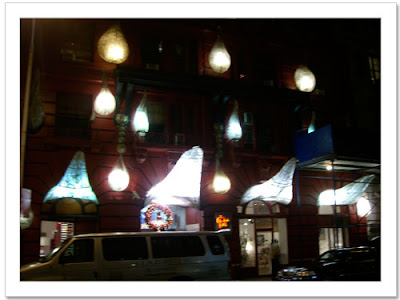 Later in the day, we met up with Chip and Susan, and then Spencer (Courtney had already left town for Christmas). We went back to Spence's on St. Mark's Place and had dinner nearby at 3 of Cups. By the time dinner was over, it was already time to go out, so we first stopped by the Library (Spence and Colin's favorite old haunt that has stacks of books you can take out on loan--like a library). There's also a pretty rad jukebox. Colin kept calling it a dive bar. But looking around at the clean bar and the tame croud, I thought to myself, "Geez, I guess he's never been to Jasper's Tavern before." (That's in the Kingdom.) To its credit as a dive, there was one loo there that didn't lock. But I kept falling asleep. So we decided to move on.Next stop was Lit. At first glance, it just looks like a regular place, but downstairs in the basement, they play nothing but old style 50s and 60s rock and roll. There was some boogie woogie, rockabilly and some "do the twist." So we rocked and danced and twisted and turned all night long!

Then we got pizza and I was so hungry from dancing so much that I ate some of Colin's bacon and sausage slice. It makes me oozy now just thinking about it.

Email ThisBlogThis!Share to TwitterShare to FacebookShare to Pinterest
in: new york, nightlife, travel