A snowy night in Burlington sure makes for great sport. As dinner time rolls around and people hunker down at home, the abandoned streets become perfectly groomed trails for skis, sleds, snowshoes and snowboards. Yes, snowboards. We tried it out last night during the snowstorm. It was so much fun!

Well, first Col, Isaac and I went up to the country club. There's a great sledding hill there and someone had built an awesome kicker. So we took turns going off the jump. I got some good air off a couple of them and even finished one landing with a sweet butter—my first one! And then I let myself fall backward into the deep dark snow.

I love lying in deep snow at night, peering up at the pink-orange sky, and letting the icy flakes pelt my skin softy.

This powder is so good for the soul.

We finally got tired climbing up the hill, so we headed home. Not before Isaac & Col decided to do donuts in the parking lot—with the windows open. When they were done and I got in the car (my stomach can't handle those jerky movements) the entire interior was covered in a layer of fresh snow. Silly boys.

Isaac and I got out at the top of Maple Street and decided to snowboard the rest of the way home. (We live about half-way down the hill.) This street boarding is a blast—the trick is to get there before the plows come through so you have plenty of base to surf on. Maple Street is probably one of the better streets to try. It's a straight shot from top to bottom and there's not so much traffic as on College and Main. Just gotta watch out for those stop signs—but don't stop or you'll be stuck! (Next time, we wanna try Cliff Street.)

We weren't the only ones with this bright idea of riding down the street. One guy was trying to snowboard down the sidewalk (too tight!). And we saw a group of about 7 skiiers and riders getting towed around on the back of a jeep. They had rigged up this system where each person had their own rope and handle attached to the car. It kind of looked like a backwards dog sled. Those kids were crazy though and I'm surprised they didn't get hit by a car or get their skis run over by one of the wheels.

Isaac tried to copy them and hold on to the back of Col's car for some speed, but he ended up getting stuck and blocking my path. I fell in the street.

All in all, it was super fun. I can't believe we haven't done this before! And the sledding hill is definitely the place to go in a pinch. Yay snow!

In the end, we met up with Kim and finished off the night with a late-night dinner at the Daily Planet. It seems to be our go-to spot on snowy nights.

Highly recommend the eve we just had. It was one to remember.
xoxo 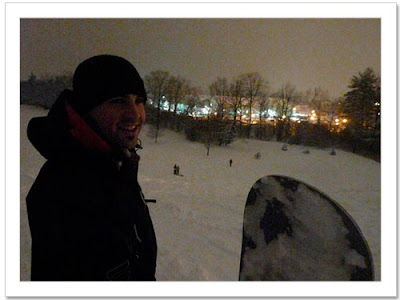 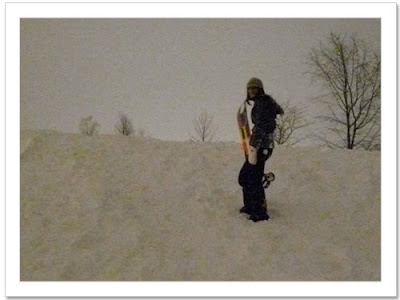 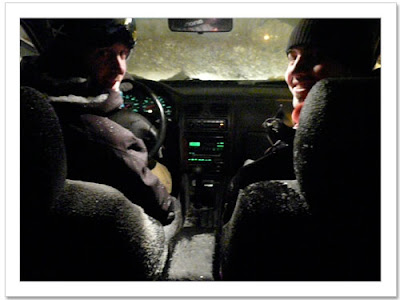 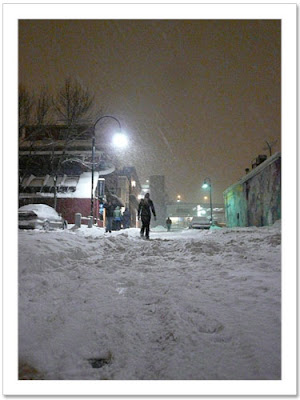 Email ThisBlogThis!Share to TwitterShare to FacebookShare to Pinterest
in: burlington, nightlife, snowboarding