Over at EatingWell headquarters, we've got a little inter-office competition going on: who can grow the best Chiapet? The champion (Chiapet) will have the glory of being photographed for an upcoming issue of EatingWell. There's a pet in every department, and wouldn't you know it, the interactive team (that's us) got stuck with the dog with the gimp leg. Er, make that missing leg.

Now, if you know anything about Chiapets, you know this is a problem. You see, Chiapets are hollow and you're supposed to fill the things to keep them watered from the inside out. With a broken leg, the water just pours out the bottom.

Paula & Paul, my co-workers tried to make a prosthesis using a sandwich bag. That didn't work. Now the dog's just sitting in a bowl soaking up the water from his feet. That means he's getting more water on the bottom half. So I imagine, after all's said and done, he'll end up looking more like one of those show-dogs with short hair on top and long hair on the bottom. Maybe that's too creepy for a photo shoot?

We do have one advantage: our office has a green house on one side and it's been sunny and warm the last few days. So that's where Chia sits for the time being. Here's what he looks like so far: 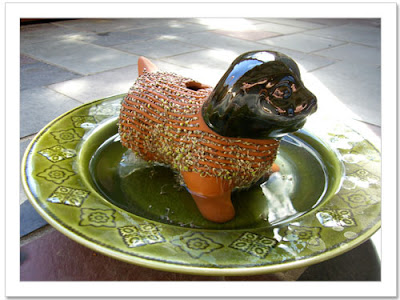 Email ThisBlogThis!Share to TwitterShare to FacebookShare to Pinterest
in: garden, work