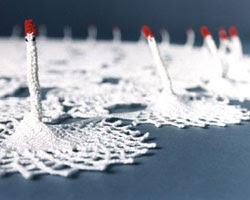 I've been knitting ever since I was a little girl. It was a skill that my mother taught me. An invaluable lesson in arts & crafts. I used my talent to create household or personal items. Say, a scarf or a patchwork pillow made from tidy, hand-knit squares. It was about form that followed function, as an afterthought.

Then in college, I met Hildur Bjarnadottir, an icelandic textile artist who came to my school to teach as a visiting instructor. I've always been fascinated with textiles and textures, and so I decided to enroll in her class called "Textiles and Beyond," an exploration of textiles in contemporary art. The class was very influential in my understanding of art and my appreciation for female craft, too often viewed as second-rate. 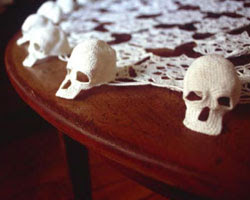 Hildur was totally rad. Young with fire-red hair. And an obsession for crocheting giant ten-foot doilies with three-dimensional skull and hand-gun borders. Growing up in Iceland, she was exposed to all of the traditional fabric crafts, for which the country is so well known, alongside an edgy, avant garde art scene. Her question, Is Craft Art?, was a recurring theme in her work and in her class. We certainly learned fiber skills—felting, crochet, embroidery, knitting, spinning, sewing—but we also learned how to approach form from an entirely different perspective. Form does not necessarily follow function.

My favorite piece that I made in the class was a piece of soft, undyed felt that I sculpted around a plain old rock. I sewed on a turquoise zipper so that you can unzip the felt and take the rock out. A custom-made jacket for a rock. It was the first time I created something in which the function actually followed the form. The whole thing emerged out of a process, thus it just made sense from a conceptual standpoint. And yes, I did come to the conclusion that craft can be art. Especially if it has an underlying message.

I haven't seen or spoken to Hildur since, but I still attend my bi-weekly knitting club. And just this morning, I learned about an art exhibit called Radical Lace & Subversive Knitting at the Museum of Arts & Design in New York. The title immediately made me think of Hildur, and wouldn't you know it, her skull-trimmed doily is actually on display at the show. Hopefully I can make it down there before June.