My sister is a cabaret dancer. Allestine is her name—a sexy, French, temptress with lots of lace panties. Every spring, she and a handful of other colorful Spielpalast thespians make their anticipated debut on the Burlington stage. That time will come soon enough. But for now those starving artists need some cash! So this past weekend, they hosted a benefit party in an old South End warehouse. 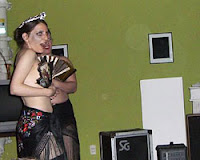 You never know what to expect at these kinds of events. Burlington has lots of strange, hidden architectural spaces and even stranger artsy parties. Once I found myself at a late-night gathering in a converted church. It still looked like a church, with stain-glass windows and a large open living room. The only thing missing were the pews and pulpit. A DJ was spinning in the balcony and I couldn’t help but feel slightly sacrilegious with a beer in hand.

Last year’s cabaret fundraiser was a yard sale in a place called the Bakery. It looked more like a broom closet if you ask me. But what charm! This year’s venue was the Factory, a steel remnant from, I imagine, the prosperous-lumber-days turned industrial-shambles turned artsy-studio-space, like so many other warehouses on the city's south shore.

Like I said, Col and I didn’t really know what to expect, except that the theme was Mad Scientist. Somehow, I got mixed up and thought that meant Mad Hatter, so I went dressed in a tie and banker’s vest. Turned out, I wasn’t the only one. My friend Elisa wore black and white checked tights that she said reminded her of Alice in Wonderland. We fit right in with everybody else who looked slightly out of their minds, though not at all like mad scientists. 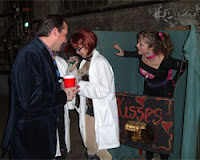 The Factory was below ground and much more spacious than I expected. There were various side-shows going on in the darkest nooks and crannies: a fortune teller sat behind a smoky curtain, black and white silent movies projected onto a screen while despondent musicians sat in the shadows and accompanied the performance, a DJ in a silver tuxedo pumped out house music in a brightly-lit corner, fan dancers wooed the crowd. We found scantily clad Allestine in the kissing booth. She was doing the kissing: $1 for a peck on the cheek and up to $5 for special requests. 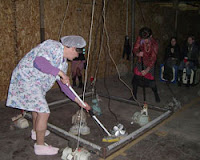 I think the highlight of the night for me was the housewife cockfight. There was a boxing ring set up about 4 x 4 feet and 4 inches high. In the ring were several Frankenstein household appliances: a vacuum power head with a Chucky doll face and extraneous plastic limbs, electric egg beaters mounted on a floor waxer, an electric knife stitched onto a dust buster. These contraptions were old and dusty and ready to fight—they all floated across the cement floor like silently possessed hovercrafts. Two Queens dressed as 1950s housewives and armed with brooms guided their path to demolition, while sweeping the floor at the same time. I left before a clear winner was crowned—halfway through the wires got so tangled, there was a minor meltdown and I was choking from all the up-churned dust. But my money was on Chucky.
Posted by Penelope

Wonderful re-telling of the evening! and your blog is so lovely - I dig the look and feel of it!

PS I know Emma from the cabaret and she referred us to your bloggie! ;)