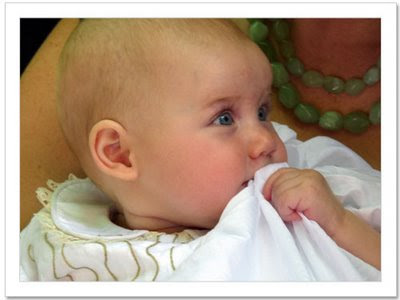 We went to Boston this weekend for Sapphire's dedication. There was a lot of excitement surrounding the event. My mother spent the last few months making Sapphire's christening gown. She stitched the entire thing by hand—it was insanely gorgeous. Of course, the babe looked gorgeous in it too.

We were also excited to see family that we don't get to see very often: my Uncle Jerry and Aunt Maria Luisa flew up from Florida, Aunt Lucy & Uncle John drove from Southern Vermont. Then there were Kevin's parents, sister and extended family.

It really was a special event. My father led the ceremony in a gorgeous outdoor setting. Brian & Christina were there to accept their vows as godparents. We sang some old hymns, which I love. The breeze rustled softly. Sapphire slept through most of the ceremony. Then she woke up during pictures and was an absolute angel for the lunch reception. The cake was shaped like a christening gown!

Later that night, Greg & Marianne, Kevin's "aunt & uncle" made spaghetti and meatballs for at least 20 people. It was a lot of fun. Colin had even more fun than I did, apparently, because he spent the evening chatting up Greg (or was it the other way round?) about wine and hot peppers and he was one of the last ones to leave the dinner table—well after I had already gone to bed.

The next day, Big Kevin brought Kev and Colin to Costco, because Colin really, really, really wanted to go. (Can you believe he's never been there before?) But all he came back with was a 2 lb. tub of spinach dip. No candy. No toilet paper. I was surprised. But the spinach dip is GOOD!

We were both sad for the weekend to be over.
Posted by Penelope

Email ThisBlogThis!Share to TwitterShare to FacebookShare to Pinterest
in: family, travel