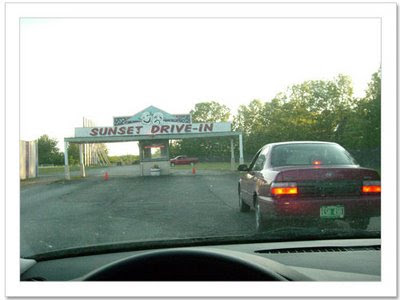 I don't know how long Sunset Drive-in in Colchester, Vermont has been around, but I'm willing to guess that it looks a lot like it did back when it first opened—the only difference being the movies they play. Everything—from the man at the ticket booth bearing a strong resemblance to Richard Keil to the fake wood-paneling at the concession stand and 70s funk background music during intermission—seems to be stuck in a time warp. And who would want it to be any different? That's just part of the charm.

Colin and I went to the drive-in for our date night on Thursday. The place has four big screens and plays 2 different movies on each screen (for $8 a person, that's a steal!). So we had a lot of options, but in the end opted for Screen 1, which was playing Pixar's Up at dusk, followed by Star Trek late-nite. We got there a little early, so we hung out by the swings till sunset and then hit the concession stand before hopping back in the car and tuning in to 94.1 on the radio.

Up started around 9 p.m. I had no idea what to expect since I hadn't seen any trailers for it. 10 minutes into it, Colin and I were both crying, but then just a few minutes later we were laughing and then crying again. We both loved it. The illustrations were fabulous—the use of colors and scale were so inspiring.

After Up, I was a little nervous that our car battery was going to die, so we turned the car on for a minute to recharge.

All of a sudden a commercial for the concession stand came on. This is where that 70s funk music came from that I mentioned before. They wanted us to go buy hot dogs and popcorn and then in the next instance there were pictures of roses blooming and then candy and then shots of clouds in the sky moving very fast (the 70s funk music was playing the whole time in the background). At that point we both looked at each other and laughed out loud. What the heck? That was so weird.

Well, we did go back to the concession stand, so I guess it worked. And since it was such a nice night out, we decided to get Chesters ice cream cookie sandwiches. Mmmmm!

At this point, it was really late out and we both had to work in the morning, but Colin was determined to stay for Star Trek. I'm so glad we did, even though we didn't get home until 1:30 a.m. We both loved the movie. I forgot that I used to watch the old T.V. episodes on the Sci Fi network. I forgot how much I loved that old Sci Fi stuff. Before seeing the movie, I had this idea in my head that it was going to be some over-produced blockbuster garbage. And while it did border on that genre, there were a lot of nostalgic throw-backs and even some story-lines that made you have to think a little bit. I would highly recommend both of the movies!

And I would highly recommend the Sunset Drive-in. It's funny, that the next day on public radio, there was an opinion piece about drive-ins in Vermont. There used to be more than 20 in the state and now there are only 4. We're so lucky to have one in our backyard. So we have to support it! Bring your friends, bring your kids. Go to the drive-in this summer! 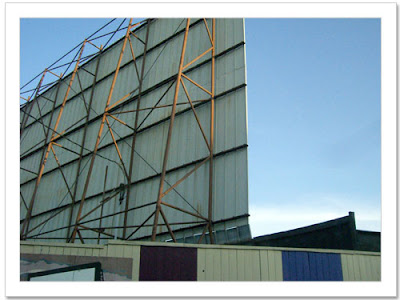