That's German for: "The Bat," a cheeky little puppet opera Em and I attended last night at the Flynn Space, put on by the Viva La Voce Puppet Opera. I say "little," which it was in many aspects, quite especially in size, but in others it was large and grandiose.

Based on the operetta Die Fledermaus by Johann Strauss II, the puppet show, according to the show's program, tells the story of the wealthy Gabriel von Eisenstein, a gentleman of leisure.

In 1873, the Viennese Stock Exchange collapsed on a day called 'Black Friday.' What was urgently needed was a brilliant new operetta to cheer up the Viennese bourgeoisie and console them from their depleted bank accounts. The result was Die Fledermaus, first staged in Vienna, 1874.

Also known as The Revenge of the Bat, Die Fledermaus tells the story of the wealthy Gabriel von Eisenstein, now the object of exquisite revenge after he played a prank on the respected Dr. Falke (when Falke was dressed as a bat). A forthcoming party at the eccentric Prince Orlofsky's offers the opportunity Falke has been waiting for..."

I've never been to a puppet opera before, and so I didn't know what to expect. Opera? Puppets? Well, yes and yes!

It really was an opera: the show's producer, Roxanne Vought—who I recognized from Spielpalast Cabaret, local Vermont soprano Beth Thompson, and other singers carried us through a complicated little love affair half in German half in English and sometimes in French and Italian. And even though I don't speak the language, the story and emotion were quite clear in their every sound and movement.

But for me, what really stole the show were the puppets, reigning over a brightly lit puppet stand center stage. Costume couturier extraordinaire Kathleen DeSimone really outdid herself this time. The intricate detail and fabrication was exquisite. From the expressive dresses and suits right down to the top hats, masquerade masks, and lady fans—and right back up again to the people-proportioned costumes to match their mini-alter-egos.

The show was fun, light-hearted, and witty—a satire of wealth, love, deceit, and power. It offered us both plenty of chuckles throughout the night and culminated in the fourth act with all the drunk little puppets dancing and singing in the city's prison, all the whilst downing champagne and resolving to blame it all on the bubbly. And rightly so! 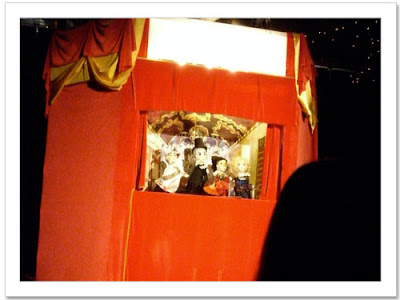 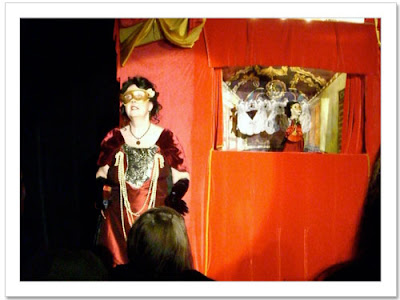