Col and I stopped by the new exhibit at the Firehouse Gallery today. Decked Out features the work of 8 artists, both in their original form and as screen-printed designs on snowboards. All of the snowboards featured are Burton snowboards and our friend Todd helped pull together the pieces for the show from the company's archive. So we've been wanting to check it out...

The show itself is pretty cool. I think the main concept is to blur the lines between art and commerce—and promote the company's new line of boards and bags featuring artwork by Andy Warhol. In the back there's even a t.v. monitor displaying on one side the snowboards being made in the Burton factory, and on the other side Andy Warhol in his studio “The Factory.”

In most cases, I found the original artwork much more compelling than the screen-printed versions. They were more organic and textural than the shellacked surface of the boards. But there were also instances where the artwork duplicated on the board added a new layer of meaning to the original work. One artist played with the irony of stitching pieces of card stock together (rather than fabric). Then printed on the board, the stitches and paper become even stiffer and more resilient to the elements to snow and water (Colin said they're printing that design on surf boards now too). Another piece of skull and cross-bone was drawn with non-archival ball-point pens. The ink will fade. And so the act of duplication is an act of preservation.

We enjoyed the show. I was psyched to see my new board was on display (although for some reason I neglected to take a pic) and turns out one of my favorites was designed by a friend (Marin). Here are some pictures below. You can see the rest here. 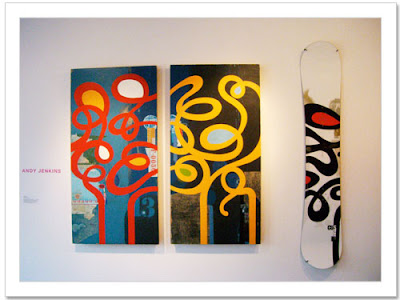 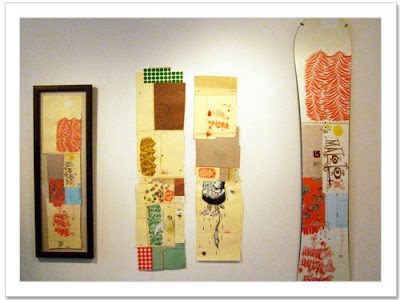 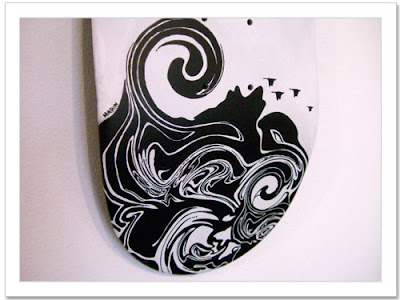 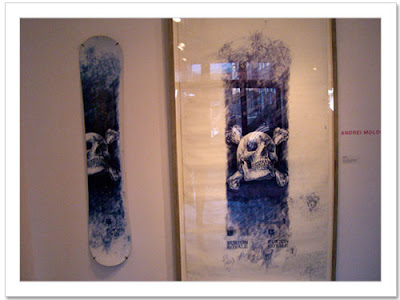 Email ThisBlogThis!Share to TwitterShare to FacebookShare to Pinterest
in: art, burlington, friends, snowboarding