I always dread the drive down to NYC. Mostly because I know we'll be spending just about as much time in the car as we do on the actual streets of the city. But you know what? In the end, it's always SO worth it. We drove down to stay with our friends Courtney and Spencer last Friday night and got in around 12:30. I went straight to bed and didn't wake up till after 10 the next morning. The boys had already gone surfing and were on their way back to the city by time we gals got out of bed.

Courtney and I decided that their absence was a perfect excuse to hit up Cafe Mogador next door for a Moroccan brunch. I ordered my favorite dish: poached eggs with tomatoes and halloumi cheese. Mmm, it's so good! You just can't get that kind of meal in Burlington, Vermont.

After brunch, Courtney and I decided to go get our nails done. For $10, I just couldn't refuse. And I was so inspired by my nail color, I bought a skirt to match it from American American and wore it that very night. Here's me, waiting outside Lil Frankies for dinner in my new purple skirt and my new purple nails: 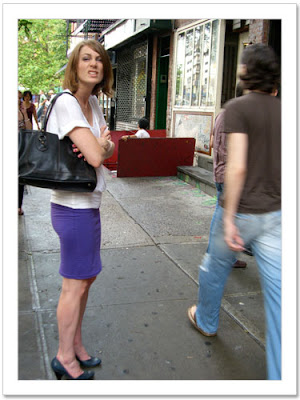 Dinner was so yummy. I had handmade beet and ricotta ravioli and a delicious Italian white wine (I don't remember the name; it was in Italian). After dinner, it was time to celebrate Courtney and Colin's birthdays. We went to a karaoke place in Little Korea. It was... a little sketchy. 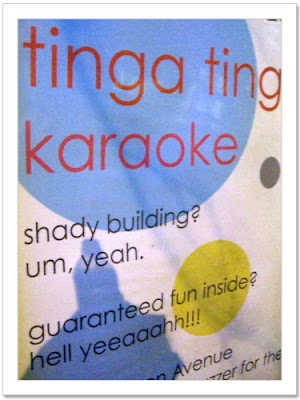 The walls were covered in silver mirrors and there were white fake flowers hanging from the ceiling: 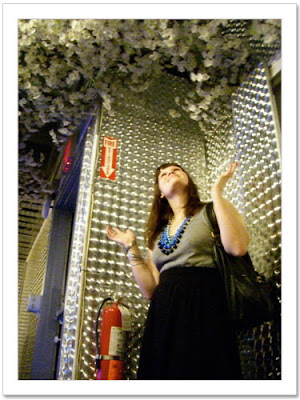 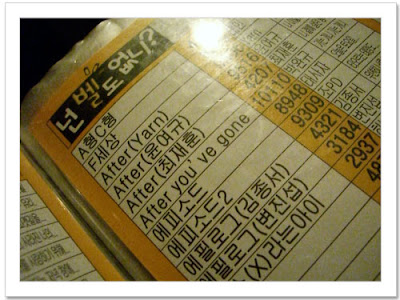 Still, we had a blast with tambourines and all. We finished the night on all cylinders with a late-night dance party in the basement of Lit: 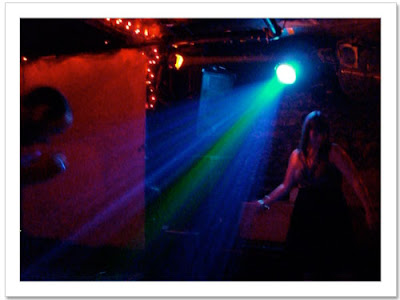 Next morning, Col and I stopped in for another Middle Eastern breakfast at Cafe Orlin, before heading out of town. Short trip, but so good. Thanks Court & Spence! Hope we see you soon (and that it's for a house-warming party). xoxo
Posted by Penelope