the body fools you 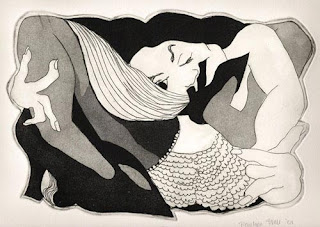 You know when you're looking through old journals and clips of writing and you cringe at your own cheesiness? That happens a lot to me. It's just a part of growing up. Well, I was looking through some of my college documents just now and found an artist's statement that I wrote for a gallery exhibit. I was surprised to find that everything I wrote (five or so years ago) is still very relevant to how I feel today. My imaginary themes are still the same. The words are still the same. I thought I should put it here on my blog, so that I can keep looking back and reminding myself of what's important. I only wish I had pictures of the two pieces, which are long gone. But here's a piece I did around the same time period. And the statement:

My interests lie very much within the realm of the human body in every aspect: theatricality of the body, costume and texture, metamorphosis, eroticism and sexual identity, textual representation, body as palimpsest… More generally, I recognize the irony of self-identity and body image juxtaposed with imminent aging, growing wrinkly, and eventual dying.

Crag and Polka Dot Dress both represent the same interruption of poise and deterioration of control that one feels in the wake of unforeseen forces on the physical body (sleepiness, illness, bleeding, slipping on ice, etc.). Often in my work, a part of the whole body or form takes on its own identity or the identity of another form (e.g. a breast as an eyeball) in order to release both the romantic notion of the classical woman as a smooth, clean entity who smells nice, does not excrete bodily fluids, and is essentially detached from any sort of inner bodily identity other than having a womb—as well as the notion of the woman whose duties belong to a systematic orderliness: ironing, making beds, wearing nylons, and popping out babies every eighteen months.

The self-contradiction that emerges during this introspection evokes a necessary comic relief to the dire reality of mortality. I laugh at my own hypocrisy because, well, what else can I do? I love the idea of pretty, frilly lingerie and miracle bras, but in the end I have to admit that my boobs have a mind of their own.
Posted by Penelope

Email ThisBlogThis!Share to TwitterShare to FacebookShare to Pinterest
in: art, writing