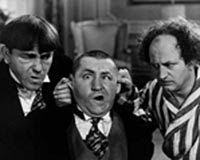 As a girl, my sister Emma had an undying passion for the Three Stooges (she still does). As her little sister I was inclined to feel the same way. We would record the New Year's Eve Three Stooges marathons on T.V. and play them back in their entirety, finding hours of pleasure in their simple, black and white humor. It was silly really, but we loved them.

Our favorite stooge was Curly. He was the most sensitive of the three and bore the brunt of all the jokes and slapstick malice. When his character was replaced in later episodes by Shemp and other crackpots, the trio was never quite the same.

One thing about Curly, though completely dim, was his unusual sensory awareness. The scent of Wild Hyacinth, for instance, drove him absolutely wild. You could say it revitalized his energy, enough to help him win a failing boxing match. (He also goes flailing mad in a different episode every time Larry plays Pop Goes the Weasel on his violin. But that's another story).

The wild hyacinth bit always stuck with me. Ever since I can remember, and perhaps because of that very episode, whenever I see or smell the blossoming fragrant flower, I feel revitalized.

I was wound up today. So tightly wound, I could barely let any air in to breathe. I woke up on the wrong side of bed and never really made it to the bright side. No, it wasn't a good day. That is, until I was walking home from work. I smelled it even before I laid my eyes on it: a blooming patch of hyacinth, growing wildly in vibrant hues of pink, ivory, and purple amongst a junk pile of empty Pepsi bottles and broken tennis racquets.

Now what's the thing that calms Curly down? Cheese.

Yeah, that sounds about right. This day might be looking up after all.
Posted by Penelope

Email ThisBlogThis!Share to TwitterShare to FacebookShare to Pinterest
in: film, food, sisters