day with the dinos 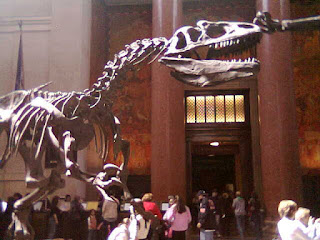 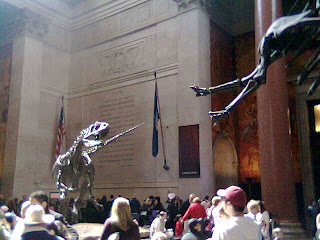 In New York. Col and I went to the Museum of Natural History yesterday. It was so cool. I think my favorite skeleton was the giant armadillo--the sign called it a "tank on feet." Too bad we didn't get a picture. But here's the dino that greets you when you walk in. I guess I never really believed dinosaurs existed. I'm not sure I do even now. Are those bones really real?

Col really liked the astronaut ice cream. We tried the neopolitan flavor. It's dehydrated and kind of sticks to your teeth.

We saw a giant blue whale hanging from the ceiling and an artist's rendition of a giant squid attacking a sperm whale. Holy cow. I say "artist's rendition" because here's one thing I learned: no one has ever seen a giant squid alive in its natural habitat--only washed ashore or in a net. The only evidence that this underwater battle occurs is from circular scars on the whale's skin from the squid's tentacles. Cool.

The planetarium (or planeH-arium, as Col likes to say) put on a space show called cosmic collisions. I got car sick from all of the spinning stars, but Robert Redford's voice-over soothed things back into place.