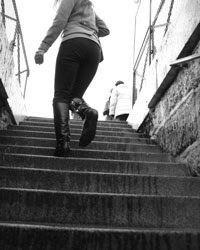 Over the New Years' holiday, Col and I spent a week in Paris. We were exiting the metro one day, when we saw a very old Chinese man attempting to haul a very large suitcase up the stairs. He was struggling and appeared to be out of sorts.

We walked up to him and asked if he needed help. But he didn't speak French very well. He just nodded with a kind smile and pointed to the luggage. Col and I went on either side and lifted the luggage easily up and above to street level. When we mounted the lengthy stairwell, the man turned to us and said the only thing in French it seemed he knew to say: "Bonne Année," which means good year. The man said it over and over. Even as he was walking away down the rain-glistening sidewalk, he turned and waved and yelled, "Bonne Année!" And we said it back. Even though it wasn't January 1st.

That's what you say in France when you want to wish someone Happy New Year. But you don't just say it on the day. You say it for the weeks leading up to the day and for weeks afterwards. Bonne Année. Two simple words, which translate literally to good year, are packed with so much meaning, hope, and good will. The distinction is slight, but the implication huge when you consider that one wish (happy new year) speaks to a single event, while the latter (good year) applies to every single day of the year. Every day is a new day, after all.

Good year leaves the door of well-intention wide open to all sorts of emotions, promise, resolutions, and all kinds of years: there's the calendar year, of course. But there's also the fiscal year (good budget!), the year of vintage (good wine! good health!), the school year (good luck!), and the birthday (good for you!).

There are 365 different birthday years. Mine happens to be today. I have a feeling it's going to be a good year. And I feel inclined to thank the old Chinese man for starting me off on the right foot. Merci Monsieur. Bonne Année!
Posted by Penelope

Email ThisBlogThis!Share to TwitterShare to FacebookShare to Pinterest
in: france, i'm thinking, travel