It's Hanushka's birthday today. I called her to make sure she was having a good day. I gave her all the gossip I was good for (not much) and she repaid me with the best gossip of my life. Enough to elicit a gasp so loud it woke Colin up from his nap on the couch. Now I can't tell you what it is though, can I?

Before the call, I was working on Eat Peas and watching some old sitcoms: Designing Women, Perfect Strangers, and Whose the Boss. Colin came home during Whose the Boss and he got hooked right in too.

"Remember the good old days when there were just sitcoms and no reality shows?" I said.

I told Hannah about the sitcoms. She was like, "No way! I was just watching Whose the Boss too! Was it the one when Sam gets caught for cheating on her French test?"

And I was like, "Yeah! Ohmygod, that's so weird." Turns out ironically that she was switching back and forth between Whose the Boss and some reality show I've never heard of called I Love New York. Oh, the webs we weave...

Meanwhile, the new Eat Peas post is up, and it's a good one too, I might add! 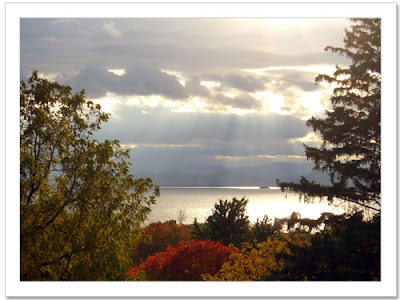 Here's a picture from yesterday. That's about as much of the beautiful day I got to enjoy since I was working on those freakin' menus for work all afternoon. Oh, and then we did go to Isaac's birthday party last night at Red Square (he and Hanushka have the same birthday) which was pretty uneventful. Except that some drunk guy tripped over some cables and pulled down the speakers and projector that were broadcasting the Red Socks game on the side patio. Which was fine by me and quite funny actually (all the security guards went running).

Email ThisBlogThis!Share to TwitterShare to FacebookShare to Pinterest
in: nightlife, people, sisters