I grew up learning to love bugs. This was never too difficult to do out in wild nature where the bugs roam free and happy. I’ll never forget the first time I heard a cicada chirping. I was living in Connecticut at the time. I thought I was hearing rambunctious crickets. 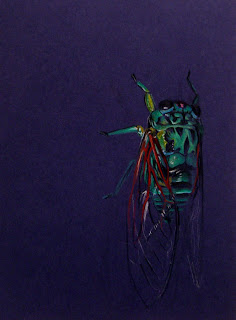 The little boy I took care of said all-knowingly, “Don’t you know what those are? They’re cicadas. Come here.”

He led me to a tree trunk where we found, clinging to the side of the bark, the delicate empty shell of a cicada nymph. It was over an inch long and looked like a giant translucent brown bumble-beetle (without wings). An exotic-looking creature, cicada nymphs will eventually moult and shed their skin before emerging as adults resplendently winged and ready to sing (well, the males anyways).

“I never knew we had these way up here,” I said in awe.

“Yeah, I know,” the boy replied. “And they get really loud too.” The novelty of those sacred creatures had certainly worn off on him long ago, but I was fascinated.

When I traveled to Provence several years later, I was again awakened to the cicada’s summer anthem. In that region of the world, cicada fields fill the air with sound all day under the hot sun, and louder still into the night under the high starry sky.

I have yet to see one in real life -- the closest I’ve been is in sound and the shorn remnants of a bodily outline those few summers ago. 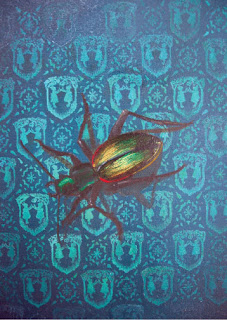 Recently, I went to an art opening at Pursuit Gallery in downtown Burlington. The artist displaying her work was none other than my good friend Elisa Freeman. A grand theme of her work -- beautiful insects -- is interpreted very differently from my own nostalgic references.

Whereas my reference pertains almost entirely to bugs in their natural setting (and therefore content and somewhat sporadic), Elisa’s fabulous creatures are very much confined to physical interiors and patterned aesthetics such as boxes, lace, and printed wallpaper. In that kind of juxtaposition and structured setting, the bugs take on a very creepy undertone. It’s the difference between hearing a cicada sing his beautiful song from a field afar and finding the same cicada tickling across your wallpaper. The immediate sensation is one of invasion and fear.

But if you linger a little longer, and peer into the shadow box cases, the artwork begins to feel like a still-life display at the insectarium. You can find beauty in seeing those iridescent wings so up close and find comfort that its strange little legs are kept behind glass or pinned like a specimen to the wall. But then in that same comfort, there is also an underlying sadness that accompanies capture. You have to wonder how the little bugs feel landing in this unnatural space. How is their own comfort threatened? How does their fear manifest itself?

Like I said, I’ve learned to love bugs in their natural habitat. But seeing them in spaces other than their own (in my bed for instance) invokes a huge feeling of discomfort for me. It’s not just that I’m uncomfortable with the bug in my bed, but I also imagine that the bug itself is very uncomfortable too. And probably very frightened.

Perhaps that’s why the artwork sparks such emotion within me -- both good and bad. These are after all just paintings, not the real thing. I still haven’t seen a cicada up close in real life in nature or in captive, but Elisa’s intricate representations on printed wallpaper patterns make me feel as though I have. They conjure up memories and feelings. They cause me to reflect on my relationship with the microcosm right outside (and oftentimes inside) my doorstep and the larger pattern of life in this world. They also manage to fill in a small piece of my own nostalgia story.

Oh, and it's worth mentioning that Elisa's work depicts not only cicadas, but lots of other cool bugs and people creatures too. But for Col and me, it was the cicada piece. So we bought it.